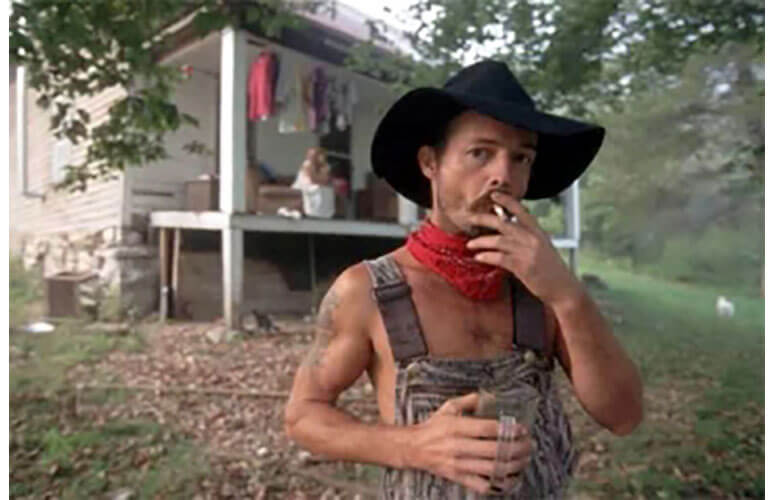 Many words, over time, have undergone changes and sometimes real overturning of meaning. Today I will speak about a very simple garment: a red bandana.

In the last century the term “redneck “ begins to take on a very specific meaning in the United States, within a cultural area in the south east which is called Appalachia: it is an area where the population has cultural connotations that make the region a bit in its own right and special. Stereotypes indicate historically this population as generally hostile to all forms of law, which for the most part corresponds to the true: but that’s another story that, if anyone asks us, we would face willingly. However, in the early twentieth century these territories, including more than ten states, have become a veritable reserve of coal mines, which was essential because of the concomitant dizzy development of the railways: obviously just the companies that ran the extraction had benefited economically, while the local population continued to live in deepest poverty. But all this got to do with a red bandana?

Yes: this situation caused the constitution of a very powerful syndicate in defense of these workers; the symbol to identify them was a red bandana tied around the neck, worn by miners members of the United Mine Workers of America (UMW); it even had a multi-racial valence, because it was worn by individuals who felt a real tight group, regardless of the color of the skin.

Since there was a lot of tension, and clashes between syndicate and employers were often violent, with dead and wounded, who wore this bandana around his neck, “the rednecks”, did it with pride, to point out an indomitable spirit of belonging and revenge. Subsequently that word began gradually to turn towards a negative connotation, so that today the most use it to indicate someone ignorant and stubborn and with outmoded ideas. Moreover, diffusely has been lost knowledge of the true meaning of this term, wrongly attributing it to the fact that the peasants had all the red neck due to the long stay in the sun.

The world of clothing is fascinating for this reason too: the most humble garment, as a simple red bandana, can hide an involving and significant history.
Until next time.

Send us your request, we’ll answer you as soon as possible.